CLICK HERE TO LISTEN
Posted by Kev Beadle at 12:04 No comments:

New Flying Lotus album due out in October 2012 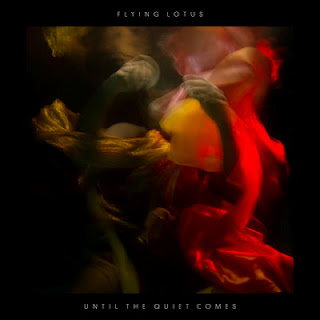 Flying Lotus has scheduled the release of 'Until The Quiet Comes', the long awaited follow-up to 2010's Cosmogramma and his third on Warp Records, for a worldwide release on October 1st/2nd.
Composed, according to Flying Lotus, as “a collage of mystical states, dreams, sleep and lullabies”, Until the Quiet Comes has the distinct feel of this nocturnal trip. From the twitching descent into a subconscious state and the out-of-focus time-ether of the journey that follows, the sound is an unhinged, yet elegant evolution of the melodic and rhythmic interplay that is woven into the DNA of Flying Lotus’ aural personae.

All this stylistic mingling and genre-melting has contributed significantly to shift music in a direction that makes intellectual leaps without forsaking the all-important heft of a bassline or unimpeded ‘swing’ of a drum beat – the same way so many masters of soul music have infused their songs for lovers and dancers with brilliant and heady subtext for decades. Until The Quiet Comes follows this tradition while clearing a path distinctly it’s own, which is a mark of a classic.

Check this track 'See Thru To U' with Erykah Badu HERE

CLICK HERE TO LISTEN
Posted by Kev Beadle at 02:47 No comments:

Kev Beadle
London, United Kingdom
With his early musical roots firmly in soul and jazz Kev Beadle has been one of the scene's main selector/tastemakers since the mid/late 80’s. He has played all over the world entertaining crowds with his selections and is never afraid to push musical boundaries playing a broad spectrum of music rooted in jazz and soul from days gone by right through to today's future electronica. Over the years he has had experience in many sides of the music industry including A&R, label management, promotion, event consultancy,retail and distribution. With a compilation discography in double figures, he has put together some well received compilation albums for labels like Blue Note, Cadet as well as more upfront musical offerings for labels like BBE and his own now sadly defunct label Clean Up. He also produces under the name Messengers and more recently co-producing a new project called R.K. Edits. His weekly show on Solar Radio has been running for over 12 years and can also be heard via podcast at http://kevbeadle.podomatic.com/ . He is also one of the longest standing dj residents and Beat Bar consultant at the legendary Southport Weekender and SunceBeat Festival in Croatia.

SEND ME YOUR MUSIC

Send me your sounds